By Caroline EntwisleJune 17, 2016No Comments

English as a Second Language summer classes are in full swing! Students are working hard to improve both their spoken and written English skills. One of our volunteer instructors and his students were recently discussing the great changes that have occurred in the students’ lives – living in a new place, learning new ways of doing things and learning a new language. Many also spoke of their great love and appreciation for the family, culture and history in the countries from which they came.

The instructor decided to help his students learn to embrace both their new lives and the ones they may have left behind by writing letters to their great-great-grandchildren 100 years in the future. Each student wrote two letters. The first described where they came from – their struggles, strengths and dreams in their home countries. The second described where they are now – the hopes, struggles and dreams of their new lives in New Orleans. 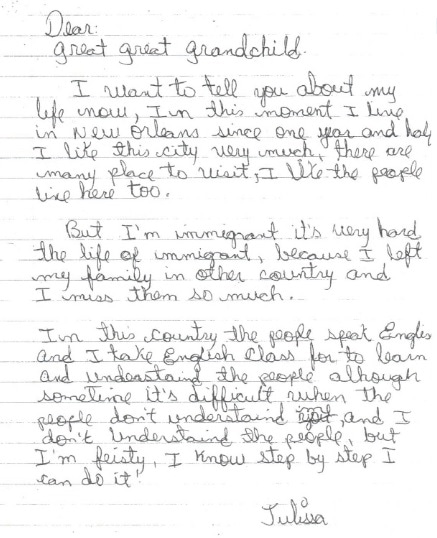